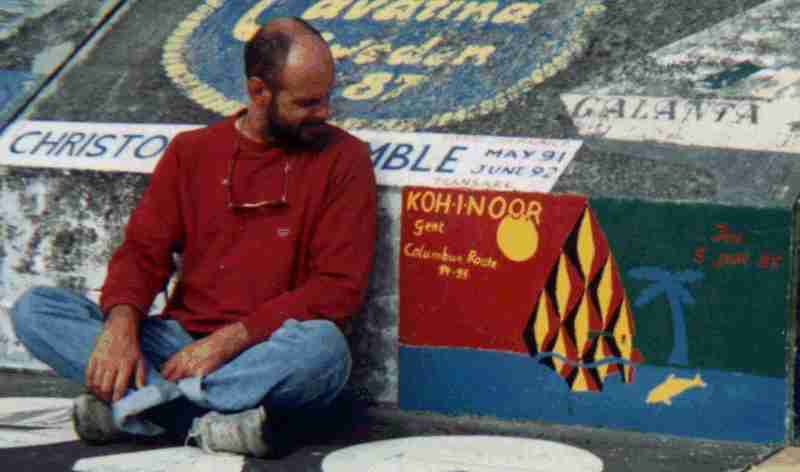 I don't remain in St Lucia for very long. Friends are comming on board in Martinique. But I do travel the island by bus. Public transport is very efficient on all islands. There's only one road around the island, and lots of minibusses tour it. They have a permit for clockwise or anticlockwise touring. They stop whenever asked, as long as they are not very very very full. One standard price makes all discusion obsolete.

There's lots of concrete building added since I was last here, when there was a lot more wooden buildings. I suppose they're changing to concrete so buildings don't get blown away in a hurricane. But I miss the charm of wood-carved cabane's.

With my friends I make a tour of Martinique. Lots of snorkeling, calm sailing, holliday. I also meet two other flemish in the "Baie des Flamands" in Fort de France. There are more of those "Bay for Flemish" in the Carribean, but I don't meet so many fellow Flemish.

Next friends will come on board in St Maarten, so I have to continue. I was hoping of a slow voyage north, but the mainsail goes to pieces and I have to sail with a double reefed main in no wind as fast as I can to St Maarten to get a new main in time. There really is no trade wind this year, I even experience three days of westerly wind. But the delphins jumping around the boat off Domenica, and the whale off Martinique make up a lot. Anchoring without anchorwinch is becomming hard for the back.

South side of St Maarten is dutch, north side is French. Belgium upside-down, as well as for the weather. Language situation is the same, French is French but Dutch is opressed by all other languages. The customs, who are employed by dutch goverment, as usual enquire about the gross tonnage of my boat. My explanation that I don't mention it because it's a yacht is as usual not understood. But I tell them everything is explained in dutch on my official flag letter, which they should understand. They don't and they leave it like that.

With English and dollars you get everywhere on the island, there is a very international population. The lagoon is said to be the best hurricane hole of the region (until last hurricane which came three monts after I left). It is full of world- and not so far away sailors. I meet some of which I followed the adventures in the press. Now I'm a member of that group ! Lots of nights in the bar, discussions on the boats, lots of people to meet. Again I'm some kind of communications officer between the germanic sailors on the dutch side, and the romanic ones on the french side. It surprises me how people can pretend they're making good contact with people when they can just communicate with some bad used words and lots of arm movements. They don't even use a sign language! Survival is possible that way, but that's about as far as you can get.

A new mainsail is ordered and payed with the budget I had dedicated to a new computer. After all, it will help me more on my trip back than that computer. So I have to forget about weatherfaxes or pactor. Radio contact is always in CW now, due to low propagation and bad behavior of american hams. They never hear my signal, they just jump on the frequency on which I'm having a QSO, and tell me to shut up and QSY. Sorry, no good word for American hams! But I succeed in passing trough most essential news.

There are elections on St Maarten, radio is vomishing publicity for the kind of politics you'd suspect more in a local club. With my friends we are invited to an elections party, free beer and a rap party for a vote. Who serves the most beer wins. Carnaval too is but a weakend version of those further south. As a white person I often feel a kind of racism, there's no danger to it but you're kept apart from everything in their lives.

I sail with 3 sets of friends around the islands, mainly passing our times with snorkeling, diving, hiking and just enjoy. Under water is marverlous here, even at night diving is clearer than what I'm used to in the Oosterschelde. You really only need goggles to see what is going on under water. But I do have to follow another diving course to be able to fill my botles as my diving degree is not always accepted ( ** CMAS or even the *** CMAS of a friend). I suspect diving centres of being "too commercial". But so I get to see some real old cannons and some wrecks. But seeing the wreck of a sailing boat gives me a wee feeling, I'm thinking of mine which still has to carry me back over an ocean.

I'm looking for another mate to join me on the trip home, but without much conviction. I want to try it alone, I've always wanted to do at least one big single handed crossing, and this may be my last chance. So in the end, I leave alone.

Just before leaving I scrub the bottom of the boat, avoiding a haul out of the water which comes a bit over my budget. Eventough my anti-fouling is not working anymore, during the crossing to the Azores, I will hardly get any new growing on the hull, probably due to the slowly but steadily changing of temperature.

I also buy a solar panel and an electronic self steering, so there will still be self steering in the calms (a wind pilot is not working without wind !). The system works and allthough I again experience very little wind, there's still some power left for the daily CW 20W contact with Belgium.

It is a slow voyage back. I sail from St Maarten directly to the Azores, which is not by the rule. But Bermuda is experiencing too much wind to be pleasant, as I'm a little early on the season. I leave St Maarten on the 1st of May, to be in the Azores before my birthday on the 5th of june (I'll arrive on the 3rd of june). Every 5 days there's a storm passing north of me, it just gives me gusts up to some 8 bft for a short while, and a day of shifting and changing winds which which forces me to stay on deck for 24 h. But this hard day is followed by 4 days of diminishing wind, a calm, and a reinforcing wind. Lots of time to think and recuperate from the "storm". One night I see lightning all around, I catch panic. I try to assess the possible consequences of catching lightning: as I've got a fuel engine, they're not very reassuring. I prepare everything to leave ship in case of an emergency, I prepare my go away package. Ever tried to do that in a panic ? try to, it's very instructive. But everything passes by without dammage.

Sailing alone is something I liked. My boat is just big enough for everything to have a place, there's no one in the way, and I've found how to cope with sleep. Eventough I catch some 6 to 8 hours of sleep a day (mainly during the dark hours), I never sleep for longer than half an hour before wakening and going on deck to check everything. If all's ok, I just go back to sleep. It happens that I make a chat over VHF with a passing cargo, they're easier to see at night than during the day and at night the officer on deck is always pleased with a little diversment.

It is on the radio that I remark that I'm comming nearer to Europe. In Belgium they hear my signal raise above the American signals, and now it's my turn to negate their questions for QSY. Contact in voice becomes possible at times, I can answer more questions, there seem to be a lot of people in Belgium following my trip. It really is a help.

At last, after 28 days, I hear Faial's radio beacon. Land is not far away anymore, 2 days to go ? No, any time I put forward a ETA something happens to make it impossible. Just like now, the wind turns on the bow to force me to beat to windward in a forcening wind 5 to 6. There's a dutch saying "the last part is the toughest part".

At last, after a sleepless night, I sight the island. But the wind goes down, and I can't withhold myself from starting the engine (it didn't turn for the rest of the trip. I consumed 120 liters of fuel on my 10.000 miles trip) for the last 15 miles or so. So I arrive in 32 days, without motor it would have been 33 days. When reading the paintings on the wall in Horta, I remark that would have been a new slow record. Now I only equal it.

But reception is warm. The french who promised me in the middle of the ocean to keep a beer cool for me on arrival, kept their promise. The other sailor I met 2 days ago out at sea, arrives 5 hours behind me. The Norwegian I met in Las Palmas is there also. Next day we do a trip together to Pico. Two days later is my birthday. We don't find a restaurant, just the police office is open. I ask the police agent in spanish where to find a restaurant. As I don't understand his portugese, he just closes his office and conducts me to one ! And I make my painting on the wall, to ask the gods for a good ending of the voyage.

Horta is something apart in the sailor's world. There's only ocean sailors around, everyone had to do a crossing of at least 10 days to get there. you've met most of the sailors's before, somewhere else during the round-about. Whenever a boat enters or leaves harbour, there's weaving and shouting going on at the end of the pier. Everyone is experienced here, the uncertanity of the Canaries has grown into experience.

Cafe sport is the meeting place of the sailor's society. It is full of flaggs. You just excange yours with one of Peter, so I exchange my Flemish flag. Allmost every evening I'm talking with Germans, Dutchmen, French, Englismen, Scandinavian, whatever... . The voyage, the experiences, the plans for the future. I'm told this is the last place where you meet likely souls, after this you're back in the Channel between tourist who have to forget one year's stress in two weeks of doubtful weather sailing. We just take another beer on it.

Most negative part is that the problems with my back are worsening here. The anchoring and rowing in the Caribean was tough allready. I tried to row the boat during a calm on last crossing. In the end it's getting too much, I get heavy back pains while cleaning the boat. I go to a hospital, where they can't find anything (back home the doctor will find I have a double hernia). The pain is allmost over after four days (The nerves are so much damaged I don't feel it anymore), I can't walk very straight but I can move myself on board.