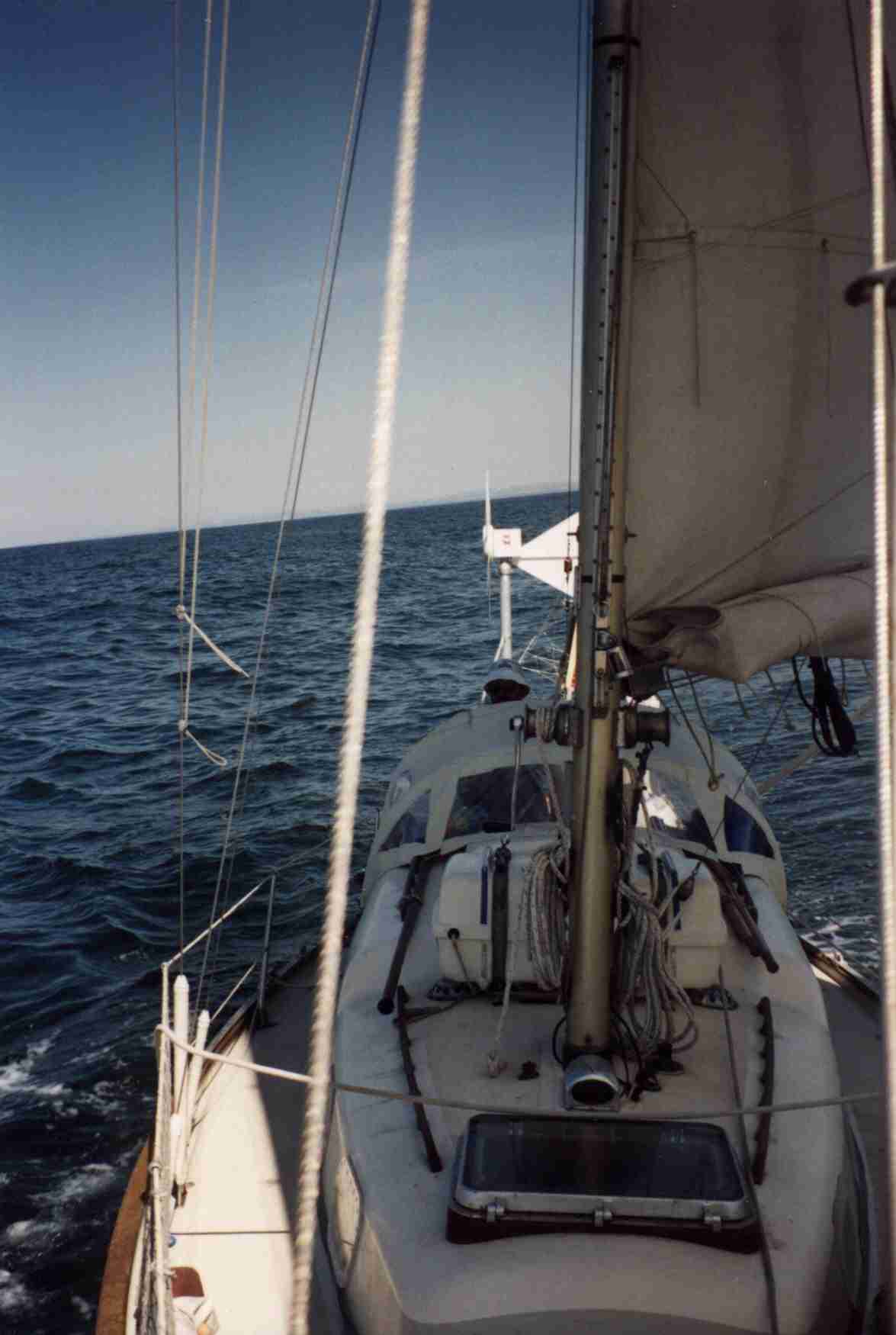 Tenerife is a period of thinking, digesting the experiences of the first part of the voyage. It is also the ultimate preparation to the big jump. My parents come to visit me as they live part time in Spain, there is still time to visit the island. Furling gear is orderd in Barcelona, the sail is being made locally. Eventough I never had any problems filling my gas-tank in mainland Spain, here it is a problem. Canaries is a world apart from Spain, Africa is close by and it is reflected in the open market, in the street cafe's as it is in the mind of  the people. I simpathise with some mainland spanish who feel just as little at home as I do. The harbour is rather rough with the swell comming in, and with the exotic crew of the wrecks that come to take proviand. To repair those wrecks would be too much work.

I've decided to take a crew, candidates come to present themselves. You find them in all sizes: an Italian Eddy Murphy, a dreamer, a motor-cycle thief from Paris. Better candidates also, but most of them first go to Las Palmas, to try their chance on board the bigger ships entering the RAC.

So I went to Las Palmas to find a crew. I arrived on the evening before the departure of the RAC. The harbour is full, no place for my boat whom's mast would not even fit as a mizzen mast on many of those boats. There's a big party going on, just to psyco up those crew to sail over the ocean. Some of them just do it because they've allready payed for the party at the other side ! If crew on those boats need some push to leave, then I'm starting to understand my own fear.

I'm at anchor on the first row when they leave. The band on the pier plays for me, as they don't hear it, busy as they are with their preparations for departure. Many try to make the crossing as short as possible, so it is over the sooner. Then there's room again in the harbour, the ones doing it by themselves find each other again to get some support.

Thus I get my best tips from a dutchman who's done this all many times before: sleep 45 minutes to one hour, one sleep cycle long. Then you can easyly get up, have a look out and get to sleep again. This tip was worth a lot on the way back. On my first crossing I go with an Englishman, a guy with little experience but nice to have on board.

One morning you cut the ropes and sail away, it's no more difficult than that. All day long you're still sailing along the coast, there's a shooner with tourist sailing a little along. Then you're alone at sea, and the only thing that matters is to arrive on land again before all food has been eaten. We can make it a while, we've got food for 60 days. We are rather shy to use water tough, we don't know exactly how much we need per day.

The first night we get a good blow, the steering ropes of the wind vane break and I have to undo and redo a bolt on the pendulum behind the boat in a pitch dark night with an unexperienced crew at the helm in a strenghtening breeze. I manage without loosing anything an two hours later we're sailing again under self steering.

The harmattan continues during the whole first week. It gives us reduced visibility and some serious gusts which force us twice to run a short while under bare poles. The new furling jib is performing extremely well, it's a lot easier. The form of the sail isn't ideal anymore, but the surface always is, and that compensates, unless you're changing jib's constantly (we're not !)

I try to grow some beans, but they get thrown around by the rolling of the boat. I will still find beans in hidden corners after my return back home ! For the moment, I quit doing any agriculture on board. It's a good idea, but the practical side needs some rethinking.

As long as we're sailing south along the African coast we still meet some other ships. At one time I have to change course quickly as I realise myself that a ship is comming straight towards us, and isn't that far away anymore. A watch out remains necessary, dont let go your attention too much.

The continuous setting and regulating of sails remains necessary, even after our first week of harmattan. At first we come into a total calm in the neighbourhood of the Cape Verde Islands. The German maritime mobile ham net says I'm in the trade wind, but after a closer look they take their words back: you're becalmed and will remain becalmed for some days ... I'm so becalmed I can walk up the ceiling ! But Marcus takes it better and helps me to accept the case. A whale also comes to help, but luckily not the same way he did with Jonas.

Trade winds: only for business class

On 18 ° N we start our crossing of the Atlantic. The trade wind is not there anymore, and we remain in calm weather with squalls for the last two weeks. We had up to 3 squalls a day, we just slalomed around them. In the beginning you're not sure wether such a cloud is dangerous or not. Thus Marcus didn't warn me anymore after some harmless ones, until we got a rough one. Luckily I saw it in time to lower sails. After this experience Marcus became an expert in assesing speed and direction of clouds, and finding routes to avoid the worst of the squalls.

It keeps us busy. I need to be cautious, the mainsail is 15 years old and up to replacment, I'd like to sail it to the other side. I'll end up sailing it to pieces in Martinique, a month after arrival. Marcus is learning to play the guitar and to cook. He's also making plans for the future. After a while he likes his cooking so much he starts planning the opening of a restaurant. I'm quite pleased with it too, we're not eating too bad considering everything comes from cans, as there's no refridgiration on board.

We are missing fresh fish. We had a flying fish hitting the oil lamp at night which we ate, but most of the flying fish that land on deck are too small to eat, so we use them as a bite. That's such a success we loose all our hooks in no time, just ripped of by the fish. We only manage to capture one yellowfin tuna, only 10 kg !

I take out the sextant to exercise, after all I've learned it and I don't want to loose practice. But the ease of GPS wins, and as soon as I've found back practice, I quit it. I know I can do it in case GPS fails, and that reassures me.

Radio is a daily returning moment of joy. It always feels good to hear the tippical da di di da handwriting of johannes. I don't even have to look for the right frequency, I just hear where he is when I sweep over the band. Even on Christmas and New Year he's there to send me his remarks and questions in CW or voice. He coordinates the "Flemish Maritime Mobile net" that came into existence with my voyage, there are quite a few Belgian hams following me on the air !

The fact that the trade wind is not what it should be, disturbs us. We are discussing touroughly the possible reasons for it (we are experiencing a "El Niño" fenomeno). At last we find the reason for us not having any wind: we have no right for it, as we are sailing tourist class. Trade wind is only for those sailing business class !

We have Christmas at sea, exchanging the presents we bought before leaving in Las Palmas. On 2nd christmas we sight a cargo, the first sign of human presence in 2 weeks ! We wish him merry Xmas over VHF and he answers. It appears to be a Greek cargo vessel en route from Venezuela to my home port Ghent !!! I start a chat about the cafe's there with the capitain. It gives me a wee feeling seeing him dissapear over the horizon. He'l probably be in Ghent sooner than I'll be in the Caribean ! I have to sing the Ghent anthem "Klokke Roeland" to come over it.

New Year's eve is also experienced at sea, even 4 times ! We had hoped to be ashore, but we failed wind. 4 times: first time as an exercise (misread the watch), second time at Belgian time, third time at English time, and fourth time at local time. But this last drink was disturbed by the first squall of the new year. We agreed to appear on next years new years party in oilskins. If anyone would ask why, we'd just mention we wore the same dress on last years party and no one noticed !

On the evening of the first of january, the aftergloom of the setting sun doesn't disappear, it even grows stronger. By midnight, there are two afterglooms side by side plus one over port, but that one dissapears quickly again. We see the rest-light of Martinique, St. Lucia and Barbados. The next morning we are just sailing amidst tourists and local fishermen, as if we just left the neighbouring island and are now up to the next pub.

We wanted to be on Bequia for new years eve, but we've missed it. So now we sail to Rodney Bay (St. Lucia), because I know where to find a shower there, and because Marcus can meet some friends there who joined the ARC. He'll take a plane home there, after his expierence at sea.

On arrival everything is calm, all shops are closed after new years party. So we need to wait one day more for fresh food, but we find relief in rum and ting and a rockband. We can change money with an Englishman who's also preparing to fly back, that saves us a cheaterous exchange rate with the customs who are opened and want their money right away. It does feel strange to answer the question "where you come from ?" with "Canaries". The people chatting in the corner stop speaking, a person whom I met at the other side comes to congratulate me with the crossing. Now we're real Ocean sailors amidst tourists.