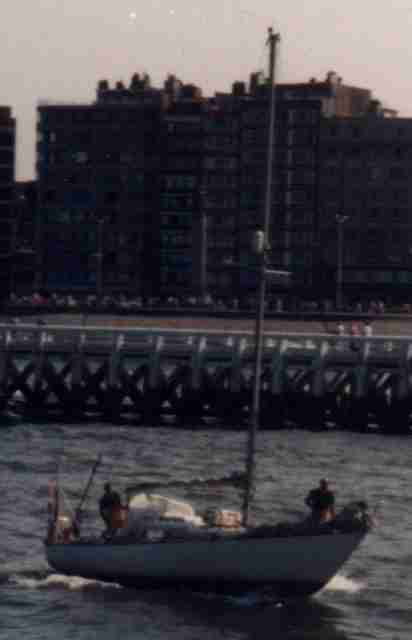 7 august 1994. That's it. Behind me are many years of work and preparation, I'm ready to go. Ready for the big jump into the unkown. Sailing round the Atlantic, the "Columbus route" is for me the realisation of a dream. Is reality going to live up to my expectations? The future wil show!

Many friends came to say me goodbye. Sailors, radio-ammateurs and colleague's make my knees tremble, as my mate shows up later than expected. It is hard to say good-bye, you're on automatic pilot, you don't think as it is too difficult to explain the how and why of such a project to everybody. The last thing I hear while setting off, is "See you in La Coruña". My plan is to sail the big crossing single handed, and to take friends on board for the smaller crossings. That can cut my costs and is a possibility for them to have a cheap sailing holliday.

Thru the Channel and the Gulf of Biscay

My mate will sail with me to Spain. He's only got one goal: to remain at sea as long as possible. That arranges me, as I have not been able to acquire much experience on my own boat. I only bought it three years ago, and I still had too many duties on other boats, skippering charterboats and crewing raceboats. I had lots of experience at Belgian level, not so much international sailing, my longest stay at sea was for 3 days. this voyage has to answer many questions.

At the start everything goes well. 5 Bft easterly and a favourable current pushes us towards Calais. During the first night we are becalmed in an unfavourable current before Cap Griz Nez with lots of ferry's around us. So no sleep to catch. Setting course towards Cherbourg, the Channel widens, the traffic remains far away, we continue peasibly in a reinforcening wind.

In front of Cherbourg a ferry heads straight towards us, he stops and asks wether we're in trouble ! A loud no, we sail free of him and hear him say on VHF to Cherbourg radio that "I contacted them, They clearly said they were not in trouble and they didn't appear to be either". But we do enter Cherbourg, it blows the whole night but the next morning we're able to continue.

Radio contact with Belgium is difficult while in the Channel. Joannes (ON4HX) wants me to switch to CW. Eventough I passed my exam only last year, I don't succeed very well. Luckily there's a tough radio operator at the other end, and the contact is improving whilst we're going further away.

We're sailing towards Falmouth where we want to wait for good weather before crossing the Gulf of Biscay. But 2 hours before entering harbour there's a good forecast from BBC. Decision is quick made, we continue towards La Coruña. We are prepared, we've got everything we need. 4 calm days an a last very good sailing day bring us across. I don't sleep much due to exiliaration. On the last night I am unable to awake from a short nap. Reality and dream are one, I don't know one from the other anymore. It takes 15 minutes to come to myself again. I realise I have to watch out what I'm doing with my sleep !

Rest and work in norhern Spain

It was a rather quick crossing to La Coruña, only 10 days from Ostend. My mate is leaving, and I remain there for a while waiting for another mate. There's three weeks to improve my boat: all running rigging is changed because i burnt my hands working with the old ropes on board !

Here I meet the first fellow-yaties. A Swiss couple who've allready sailed around the world in a tiny catamaran. They tell me everything, they try to pursuade me to go further than the Carabean. They don't like big boats, there too expensive to sail further away. They themselves have only got a sextant, a compas and a watch. Oh yes, a tiny radio also for music and a weather forecast if they can understand it.

Most of the yaties are beginners as I am. There's lots of talking about our ideas and expectations. One of my badest experiences is still a discussion with an Englishman about the danger of an attack. "shoot first and then remove the evidence" is his device. I can't agree with that, I have no weapon on board. It proved unnececary, maybe because I sail "low profile" in an old, small boat. I never locked the boat and not a thing got stolen ! If you're afraid, exercise yourself a few years in karate. If it doesn't help you in a fight (it does !), it will at least give you the self controll and confirmation to avoid a fight.

As the weather is worsening, autumn is comming closer in Northern Europe, I get the travellers instinct. I want to get south of Cabo Finisterra, south of the bad weather. So I'm leaving, single handed to Vigo, 170 miles away. The mate can catch me there, it's not even farther away for him. Again a sleepless night on my first single handed trip. A windshift makes me head for the cargo's I just tried to avoid, but makes the course I want to sail possible. Foc no.1 tears. I left with old sails because I was not sure whether I want a furling genoa or jibs. It is clear now: I want furling gear. But I'll have to wait until Tenerife.

In Vigo I catch up with my new mate, and my father who passes by just to say hello. I want to continue south, because autumn is catching up with me. But it is nog going so well anymore. After two hours of beating to windward, something breaks in top of the mast. The forestay comes down, and the mast remains upright only by te jib. I am able to quickly rig an emergency forestay with the second jib hailyard and the spinakker hailyard. We speed back to Bayonna, beating to windward was not possible anymore with my emergency repair. The mast must come down to repair the broken bits. The crane just isn't high enough to lower the mast, we have to help it a bit. It is low water spring tide, and if the mast is not reerected tomorrow, then we will have to wait two weeks until the following spring tide to have as low water. Luckily the bits get repaired in time, but just before we're going to put the mast on again, there's a squall. I find the mast back in the water, I have to dive it up. We still try to set the mast, but when it is hanging in the crane, the spanish worksmen go away because they've done with it today. After two hours of waiting and with a lot of pulling ourselves we finally manage to put the mast upright again.

We can't continue tough. Wind is still against and a little too strong (that's what they call storm). So we visit Portugal by bus, at least we've been there. Two fortresses watching each other, centuries of fighting and a customs employee doing nothing.

At last we're able to set course to Viana do Castillo, we need the engine to get there. I don't like that, the engine also is running its last leg. In the evening we're drinking cofee on a square right out of a Zorro episode, the background music is allready there.

So we continue along the Portugese coast, visiting Porto and Lisbon, cities with unknown poverty and wealth next to each other. Food is good and cheap in the little villages along the coast, something we won't see anymore along the voyage. In Lisbon my mate has to leave for home. I prepare for the first serios single handed crossing. I leave the moment I feel ready for it, without taking a serios weather forecast. I still don't find my way with the radio very well, but contacts with Belgium are still improving. At sea I am mostly able to contact them in voice, but if needed my CW is getting better. There are allready several persons who can understand my CW !

Weather is not so good as expected. First days I experience a fairly strong wind on the beam, 6 to 7 Bft. It is wet on deck, I'm not leaving my oilskins for 4 days. I can't sleep longer than 10 minutes, sitting at the chart table with an egg-timer on my head to wake me up. There is quite a lot of traffic, I have to keep a good watch. During the second night a warm front comes over me. The wind is constantly shifting, the sky is beautiful and frightening. I can only think of the hell - paintings of "El Greco". All of a sudden, I feel temperature increasing by at least 5 degrees, and 15 minutus later sky is clearing. But I am exhausted by the tension and little sleep, and when I sight Porto Santo, wind dissapears so I enter there on the engine in stead of continuing towards Madeira. That was a lucky strike, the island has a unique atmosphere. You only meet people on their way to the west.

After having recuperated a litle, I continue towards Madeira. I only just fit into the harbour (advantages of a small boat), so full is it with people planning an Atlantic crossing. Here things are getting real, everybody is buzy. The parties on the cay are diminishing, the french try to do something about it and are organising a party "pour la fraconfonie". I am one of the few who belong to both parties, the germaninc and the latin, and I find myself regularly in the role of translator. Europe is a tour of Babel.

At last you loosen yourselve from this pleazant atmosphere, it is time to continue. 200 M to Tenerife seems nothing anymore, but in a complete calm I need 4 days for the crossing. A calm is harder to bear than a storm, because you can't fight, you are delivered to the mercy of the gods. You look at your food diminishing and you just hope the wind will come back soon. Stay calm is what they tell me over the radio also!

The wind came back, Tenerife had hidden itself in it's cloud, with squalls down at it's norhteast cape, but that can't keep me from entering Santa Cruz. I am under the impression of everything that has happend, and am thinking of quitting. But after a first cofee ashore, I start thinking again about crossing. I have to continue, the biggest problems are over now, the easiest way back is via the caribbean.